Cantabile Solo and Cantabile Performer Only. 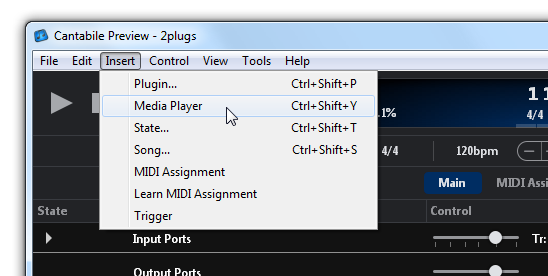 Once inserted, a new Media Player slot will appear in the main panel: 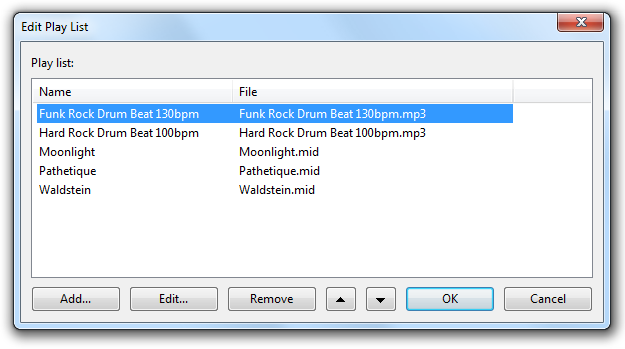 The above example shows a playlist with two .mp3 files and three .midi files.

The next step is to configure routes from the media player to either output devices, or plugins. By default each media player is created with one stereo output port and one MIDI output port.

You can now use the player's transport buttons to play the selected file. The file selector drop down can be used to select which file is to be played.

To view the contents of a media file, set play ranges and loop modes, use the Timeline Panel. 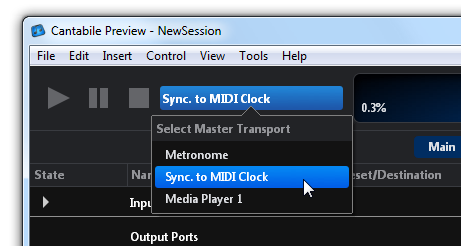 The main transport buttons on the main toolbar always control whichever object is selected in the master transport drop down.

Media files can be synchronized to the master transport - which might be another media player, the metronome or the external MIDI clock.

To synchronize a media player, right click on it and choose one of the slave synchoronization modes:

The difference between realtime and musical is the playback speed/tempo of the synced media file.

The Musical sync mode only works with MIDI files. If selected for an audio file, musical syncing will be used when setting the start position for playback, but during play the audio file always plays at its native speed.

As mentioned above, each media player is created with a default set of MIDI and Audio output ports. You can however create new ports, or reconfigure the existing ones to suit your needs.

Right click on the media player and choose either "MIDI Port" or "Audio Ports": 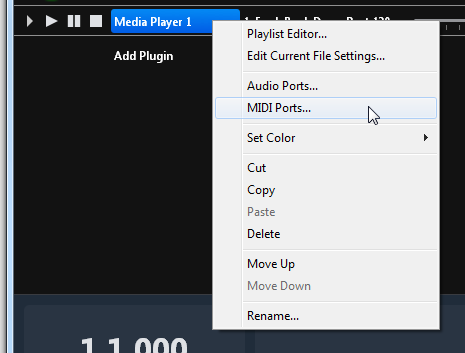 Configuring ports is similar to anywhere else in Cantabile where ports can be edited. Here's the audio port editor: 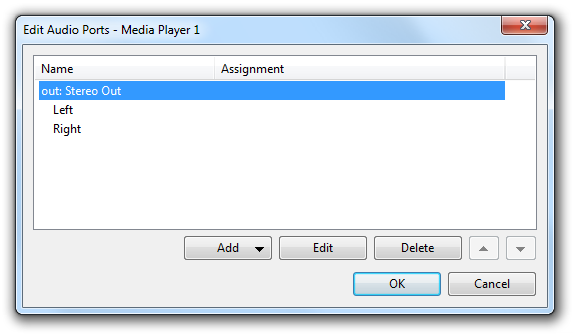 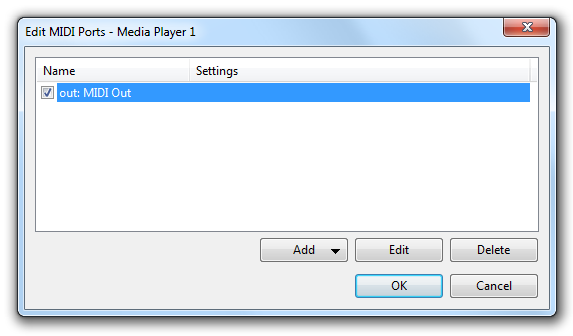 After you've created the required ports you can route each port to different plugins or physical outputs. 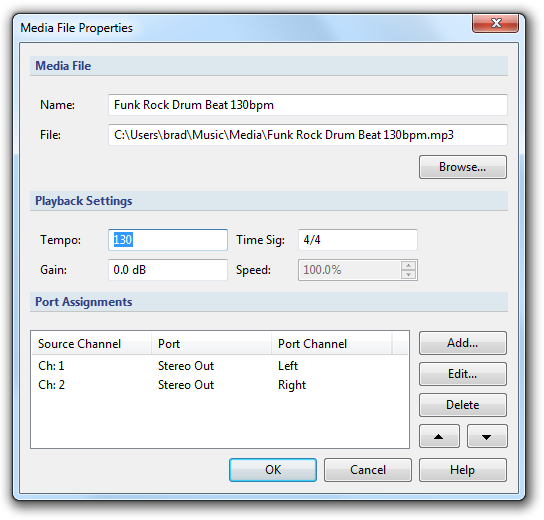 These settings perform the following functions:

Tempo and Time Signature
For audio files this defines the tempo and time signature of the audio and is used to provide musical timing information when the audio file is the master transport (see below). For MIDI files this information normally comes from the MIDI file itself however these settings can be used to override any embedded timing information.
Gain
Provides control over the output level of the media player for this file. For audio files the gain is applied directly to the output signal. For MIDI files the velocity of note events is adjusted to simulate volume gain.
Speed
Controls the playback speed as a percentage of the original speed.
Port Assignments
Use this section to map audio file channels and MIDI file tracks to the media players output ports. You can create multiple assignments from each source track channel if necessary - each with different audio gain settings or MIDI track filters.

Media files can be remotely triggered from a MIDI control surface using Bindings. For example the following binding starts/stops the media player each time a button with CC #16 is pressed on the "Main Keyboard" device.

Media players can also be controlled via States. States can be used to control the following settings between states: