States provide a way to save the state of a song or rack and then recall those states to quickly switch between different configurations. States can be used to control most route settings, plugin presets and parameters, metronome settings, gain and mix levels and more.

The main purpose of states is to provide a fast mechanism for switching between the required sounds and settings for different songs or song parts.

This video walkthrough also demonstrates how to use states.

The term "state" refers to the general ability to take a snapshot of a song or rack and save it with a supplied name.

Although songs and rack both support states, the typical use case for each is different:

For this reason song states are often referred to as "Song Parts". Song Parts and Rack States are functionally identical.

If you're familiar with Cantabile 2 you should also note that "States" is the new name for what used to be called "Sub-Sessions".

The easiest way to understand states is with a simple walk through. First let's setup a simple song with two instruments: 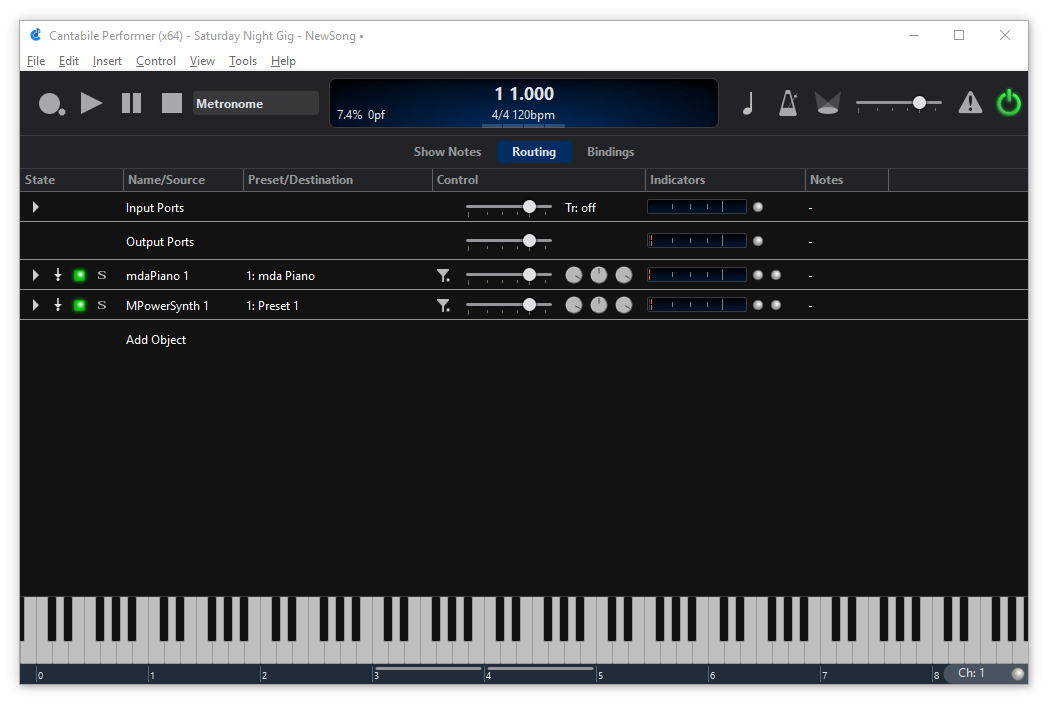 The rest of this guide will setup the states so that the one keyboard can be used play both instruments by quickly switching between them.

States are managed in the States panel which can be activated using the View|States menu command or by pressing Ctrl+T: 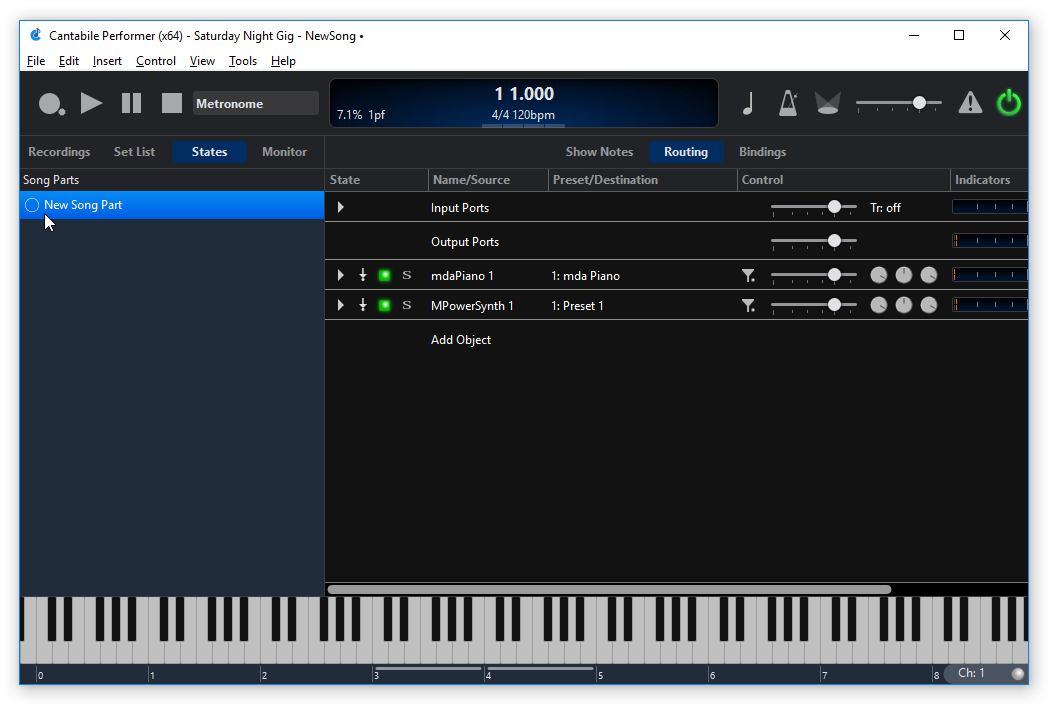 You can hide the state list by resizing it down until it disappears, or by activating it and pressing Shift+Escape.

(Note that although we're editing the song's states, the panel is labelled "Song Parts" to suggest how states on a song are intended to be used)

We will now configure two states to switch between the two instruments. 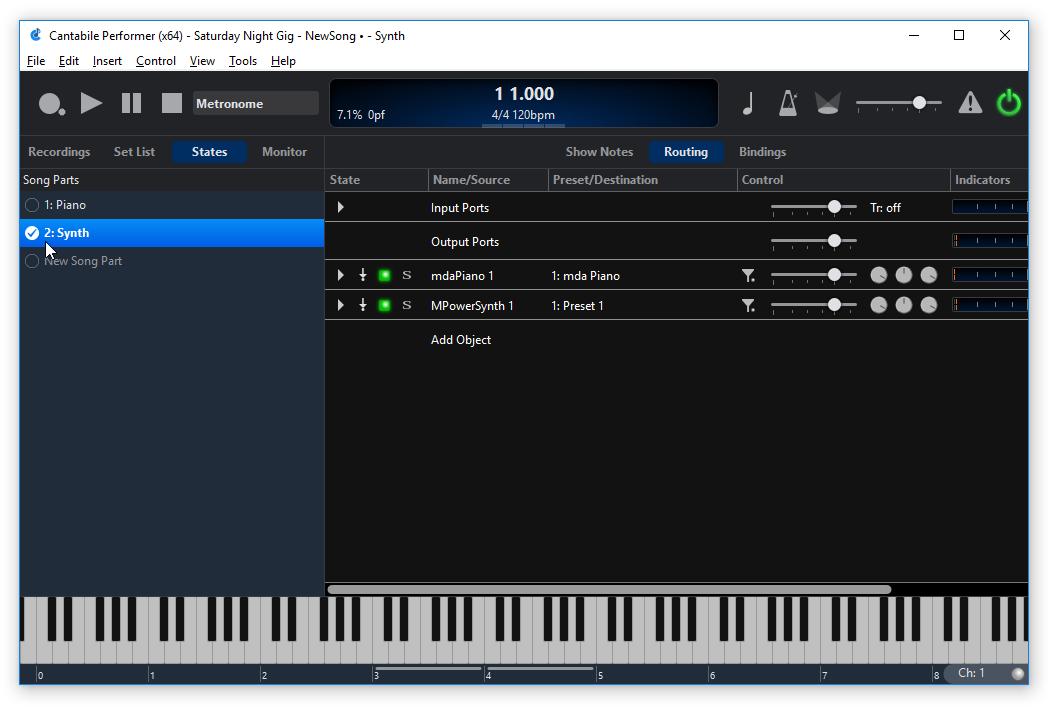 Now switch back to the first state "Piano" by clicking the circle next to it. Configure the state by: 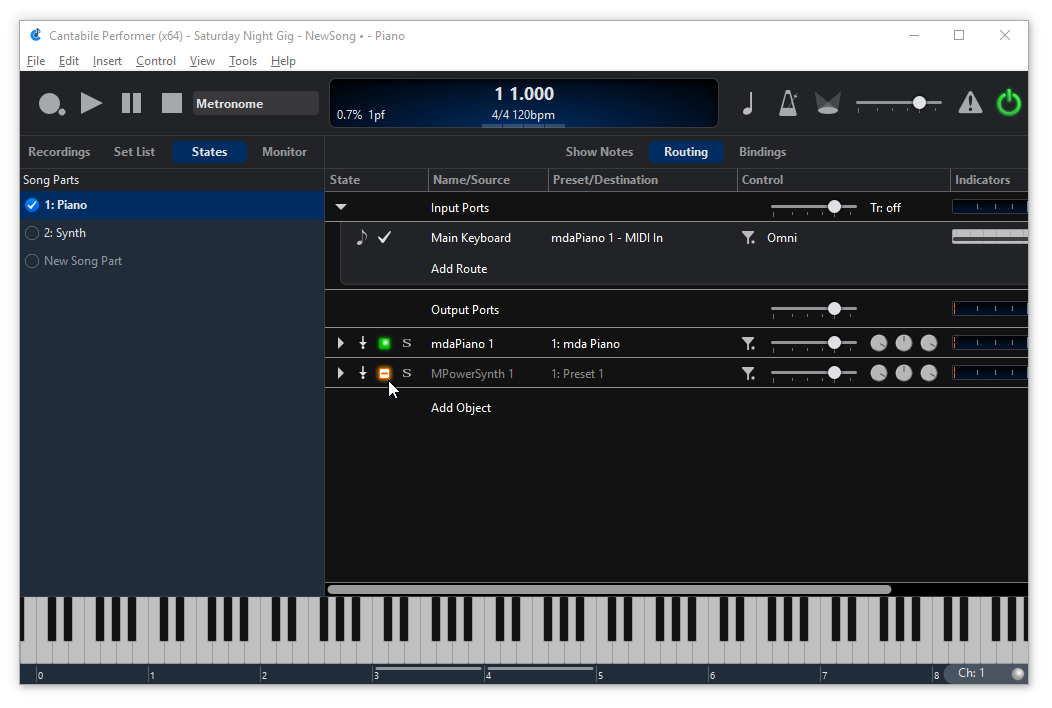 Repeat the same process (but opposite) to configure the "Synth" state: 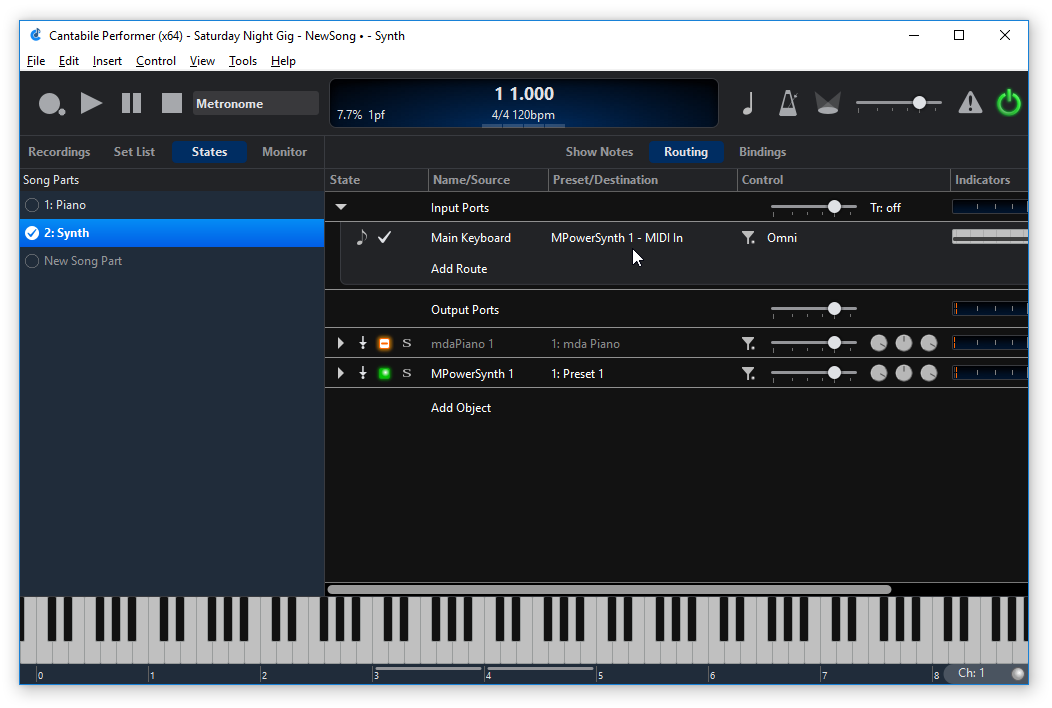 Once you're states are setup, there are different ways to switch between them:

If you switch between the two states and play notes from an attached keyboard you should hear a different sound on each state.

Normally Cantabile will automatically re-save the current state when switching to another state. This makes it easy to setup your states by just switching between them and configuring things as you need them.

Once you've got a state setup correctly however you might like more explicit control over when the state is updated. To support this you can lock a state. Just right click on it and choose "Locked".

Locking states can also make state switching faster since the current state doesn't need to be re-saved each time.

Sometimes there will be attributes that you don't want controlled by states. For example, you might have a MIDI route that should always route to a particular target and you don't want it accidentally changed when switching states. This type of control is called State Behaviors.

State behaviors are configured in the State Behavior panel which appears below the state list. If hidden you can show it by choosing States Behavior from the View menu. 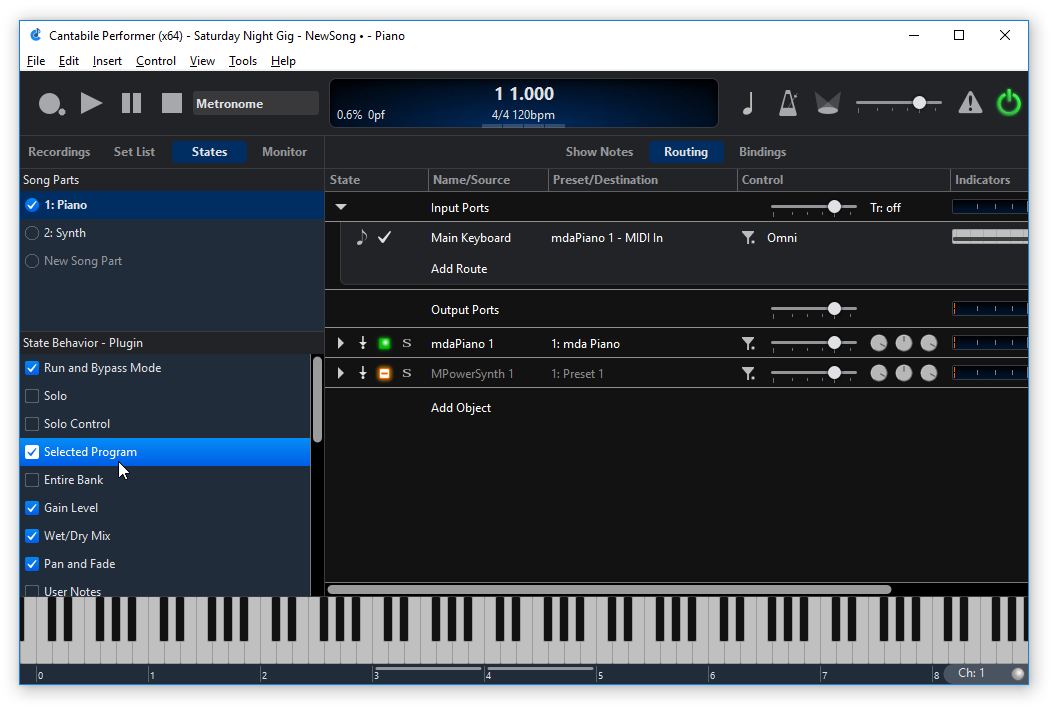 To change the state behavior of an item, first select it (eg: select a route, plugin, metronome etc...) and then simply check or uncheck the attributes you want controlled by states.

When editing state behaviours in a rack, the panel shows an extra check mark option next to each behaviour. 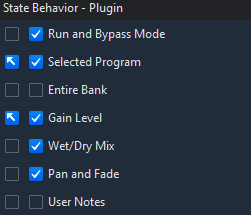 There are couple of nuances to these settings:

By default, the parent song file will store a copy of each exported setting for each of its song states. ie: each part in the song can individually control the exported settings.

You can change this behaviour with the "Exported State" behaviour on the parent rack slot: 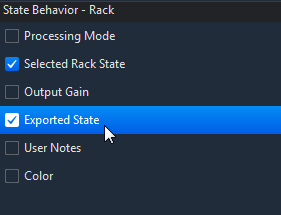 Now all settings exported from the rack will be stored on a per-song, rather than a per-song-state basis.

Sometimes you might like to turn many state behaviours on or off and doing so one at a time would be tedious.

To toggle multiple behaviours on/off all at once, first select the behaviours to updated (using Shift or Control Click or Shift + arrow keys) and press Enter.

Sometimes it can be useful to create two or more identical states. For example if your song has multiple choruses or verses you might like to create a set of states to represent the sequence of song parts, but each verse and each chorus might be the same.

To support this, Cantabile provides "linked states". Linked states each have their own name and program number, but the underlying saved state is shared between them.

If you make changes to a state, any linked states are also updated.

To create a linked state, right click on the original state in the states panel and choose "Create Linked Clone". 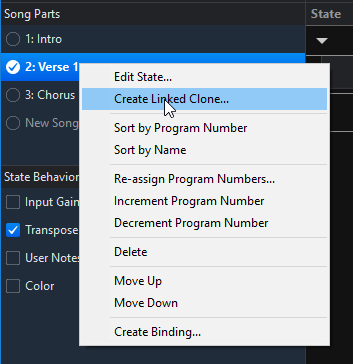 Linked states are indicated by a small link icon each state that is linked to the currently loaded state. 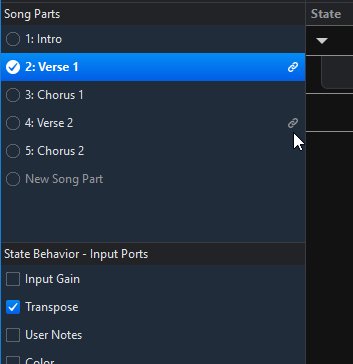 In this example, "Verse 2" is a clone of "Verse 1" as shown by the link icons. The "Chorus 2" state is also a clone of "Chorus 1" and would be indicated when either of the chorus states were selected.

Occassionally you might want to have states where most of the settings are identical, but just one or two settings different.

eg: in the above example linked states were created such that "Verse 1" and "Verse 2" has identical settings. Usually you'll want the same sounds for each verse, but you might want different show notes displayed for each (ie: different lyrics shown for each verse).

In this case you can unlink just the show notes so that each state will have different settings for the show notes, but everything else will be shared.

To unlink a behaviour: 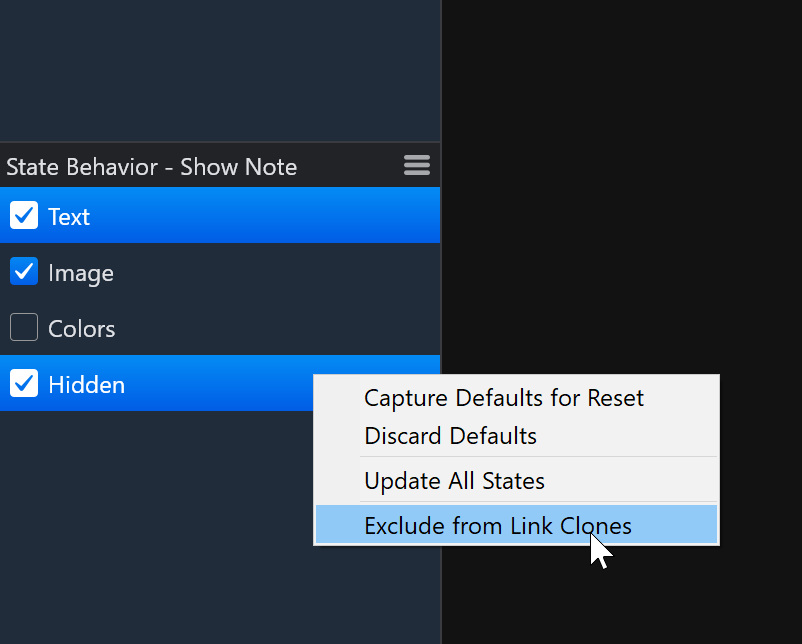 Once selected, those settings won't be shared across linked clone states and each linked clone will maintain its own settings for the selected behaviour.

Each kind of state controllable object has a default set of state behaviours that are enabled for new instances of those objects.

For example, each time you add a new plugin to a song it has the following state behaviours enabled: Run and Bypass Mode, Selected Program, Gain Level, Wet/Dry Mix and Pan and Fade.

You can change which behaviours are enabled on new objects by configuring an existing object the way you want the defaults and then right clicking in the state behaviour panel and choosing "Set As Default Behaviour". 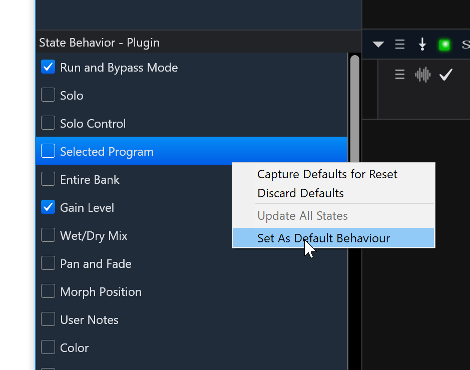 In the above example, from now on all new plugin instances will only have the Run and Bypass Mode and the Gain Level behaviours enabled.

This quick walk-through has only really skimmed the surface of what can be done with states. There are many attributes that can be controlled by states. For example:

The main thing that states can't control is the existance of objects. ie: all states have the same set of plugins, routes etc... eg: if you insert or delete a plugin, it affects all states - not just the active one.

To check which attributes of an object can be controlled by states simply select the object and check the State Behaviours panel.

Other useful state editing commands include: