Cantabile Solo and Cantabile Performer Only

Bindings let you control nearly all settings in Cantabile (and any loaded plugins) from an external MIDI device like a keyboard, control surface or drum pad. Cantabile supports many different MIDI controller events and many different controllable elements within Cantabile.

Cantabile Performer can supports "reverse bindings" where a setting inside Cantabile can be reflected to an external MIDI device so that whenever the setting changes an appropriate MIDI message is sent.

Note: "Bindings" is the new name for what was called "MIDI Assignments" in earlier versions of Cantabile 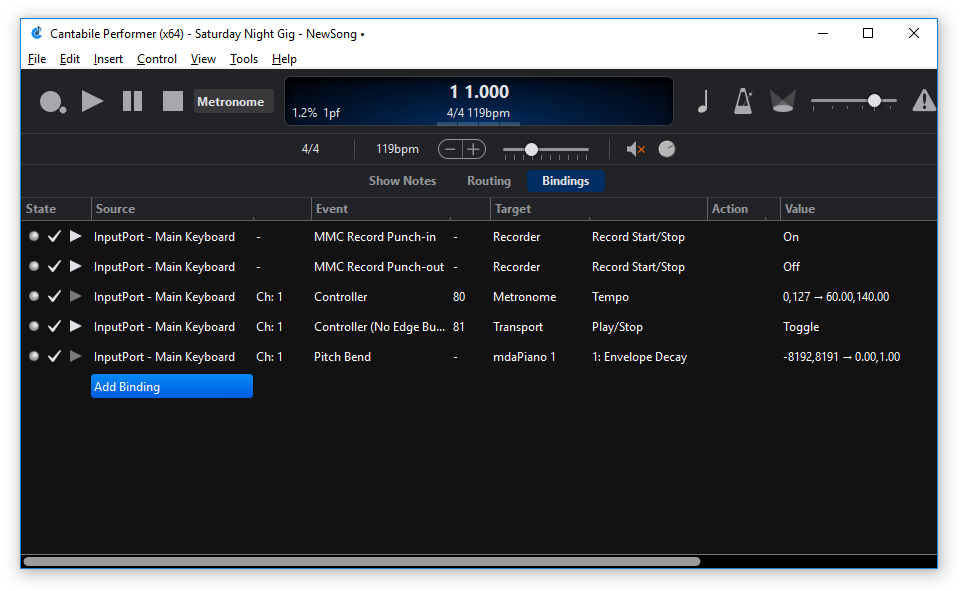 You can switch to this tab either with the mouse, or by pressing Ctrl+D or by using Ctrl+Tab/Ctrl+Shift+Tab.

The easiest way to create a new binding is to let Cantabile "learn" it. Click the "New Binding" button and choose the "(learn)" option.

You can then use the drop downs in the other columns to configure what it's bound to. The bindings editor supports undo/redo, copy/paste, and move up/down commands

You'll then be prompted to move the control you want to bind to with the appropriate target binding point selected: 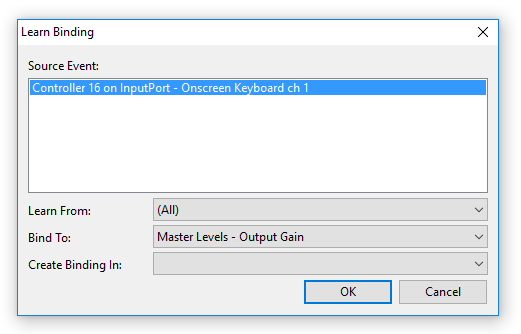 To create a learn a binding to plugin parameter, open the plugin's editor and choose Create Parameter Binding: 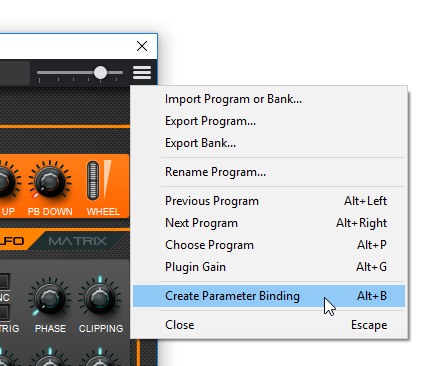 While the Learn Binding window is open you can move any setting in the plugin editor and the associated parameter will be selected in the Bind To drop down. Here the Amplifier Attack knob was turned resulting in the "A_Attack" parameter being selected: 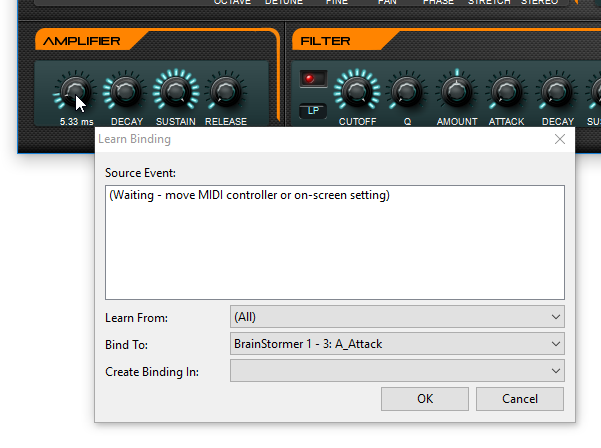 Depending on the kind of binding (MIDI -> Setting, Setting -> MIDI, MIDI -> MIDI etc...) different columns in the bindings editor may or may not be applicable.

Here is a random selection of bindings that demonstrate some of the different ways bindings might appear.

The following describes each column:

Activity Indicator
The LED indicator lights up when the binding is active - ie: when its responding to changes from the source.
Enabled Checkmark
The check mark can be used to enable/disable the binding
Delays and Scheduling
The "stopwatch" button can be used to configure delays and scheduling for when the target side of the binding should be invoked. (Cantabile Performer v4 only). See below for more information on configuring these options.
Test Button
The "play" button can be used to invoke simple command based bindings (not available on all bindings)
Source
The source of binding event. This could be an external MIDI device or an internal object such as the "Master Levels"
Source Channel/Property
The second part of the source column is used to select MIDI Channel number for MIDI sources, or the source property or trigger event for object sources.
Event Kind
The MIDI event kind to monitor (see below for more)
Event Controller
Depending on the event kind, there might be an additional controller number setting. (eg: for MIDI CC events, this would be the CC number).
Condition
A condition that can test an incoming value for a specific range of values and generate a true/false result. (see Binding Conditions below)
Target
The object to be controlled by the binding
Target Channel/Property
The second part of the target column is used to select the MIDI Channel for MIDI targets, or the target property for object targets.
Action
For MIDI targets, the MIDI event to send (CC, Pitch Change, Note etc...)
Value
Depending on the type of source and target objects this might be a value to value mapping, or other options that control how the binding works.

The condition column lets you create bindings that test a source numeric value (eg: a CC value, a gain level, a state index etc...) for a range of values and use the result to drive a target that expects a switch type value (on/off or true/false).

Bindings can test a value using a simple comparison:

As an example, suppose your external controller had 4 LEDs that were mapped to CC's 20, 21, 22 and 23 and you wanted to light up one of the LEDs to show which song state is currently selected. The following set of bindings would achieve this.

Conditions can be used to test any numeric source binding point and drive any switch or command type target binding point. When the target binding point is a command (something to be invoked as opposed to accepting a value), you can choose whether to invoke the binding when the values becomes true, or when it becomes false using the drop down in the "Value" column

Bindings have a routing mode that determines how processing proceeds after the binding has been matched to an incoming event:

Continue
The original event continues to be routed as if the binding didn't exist.
Suppress
The original event is suppressed. Subsequent bindings and other MIDI targets won't receive the event. This mode is useful when binding specific notes to action (eg: binding the lowest key on your keyboard to move to the next song)
Block Until Complete
The target of the event is invoked, and all incoming MIDI on the same MIDI port is queued for processing until target action has completed. This mode is useful when binding to slow actions where you want to make sure the action has completed before sending subsequent events. (eg: loading a song and then sending configuration events).

Note: some binding targets support immediate and delayed versions of the same action. eg: "Set List -> Load Next Song (Delayed)" and "Set List -> Load Next Song (Instant)". The blocked routing mode doesn't work on the delayed versions of these actions as incoming MIDI will only be blocked and queued until the delayed load has been initiated, not completed.

In Cantabile Performer you can configure a delay between when a binding is triggered and when the target side of the binding is actually invoked.

The "before delay" is a delay between the time of the triggering event and the time the target side of the binding is invoked.

Bindings can be scheduled in several different groups within which the delay timings are calculated relative to each other.

ie: the pre-delay causes a delay between the last currently pending binding in the group and the post-delay causes a delay between this binding and any other subsequent bindings in the same group. For example, suppose you had two bindings each with a 500ms pre and post delay. If these were configured in the same group and they were triggered at the same time, they would be invoked as follows:

A third binding the the same group with a pre-delay of 0 would trigger at 2000 milliseconds (because of the 500ms post-delay on the second binding).

A bindings delay group is set using the "Schedule this binding's delays with" drop down.

The last "same trigger" option is only available on trigger bindings such as Song - On Load.

The "Block Other Operations Until Complete" option specifies what happens if certain major operations occur (such as song or state switch, engine shutdown etc...) while the binding is in the pre-delay period:

For example suppose you have a binding configured to fire 10 seconds after a song loads. Then suppose you load the song and then immediately switch to another song (before the 10 second time out). If the binding is configured as blocking then Cantabile will block the song switch until the 10 second time expires, the binding will then be invoked and then the new song will be invoked. If the binding is configured as non-blocking the delayed action will be canceled and the song switch will happen immediately.

By default bindings are marked as blocking. If it's not important that the binding be reliably invoked then marking the binding as "non-blocking" will allow for faster song and state switching because the engine doesn't need to wait for the bindings to fire.

A binding can generate sys-ex data if the target is a MIDI port and the event kind is set to "SyeEx". For details on setting up sys-ex bindings, see the Sys-ex Expression reference.

Often you will want to configure bindings that work across all songs.

eg: it doesn't make much sense to create a binding in a song to load the next song in a set list since you'd need to create an identical binding in all songs for it work correctly.

For this reason, Cantabile has a "Background Rack" - a special rack that is always running in the background and whose primary purpose is for global bindings.

Note that not all binding targets are available from the background rack. eg: you can bind to a specific plugin in a song because that song might not be loaded when the binding is invoked.

Each song and rack has it's own set of bindings and bindings are processed in the following order:

The most important part of all this is that the Song bindings take precedence over the Background rack bindings.

Let’s say you have a button on an external controller that for all your songs you want it to perform some function. You could create a binding for that action in the background rack.

Now let’s say for that for one particular song you want to change that button to perform some other action. If you create that binding in the song and set its routing mode to suppress — the song’s binding will take precedence over the background rack bindings and effectively override it.

Most event kinds are self explanatory as they simply reflect the associated MIDI event. For MIDI Continuous Controller events (CC's) however there are a couple of different ways they can be used - depending mostly on the type of physical control they're originating from: 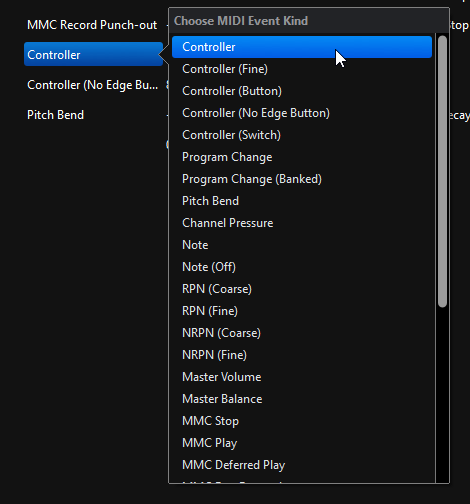 To explain some of these:

Controller
This is a normal MIDI CC event that can be assigned to a variable value (eg: a gain level)
Controller (Fine)
These bindings combine MIDI CC 0-31 with 32-63 to create a more precise 14 bit controller.
Controller (Button)
A momentary MIDI button that sends a value > 64 when pressed and < 64 when released. This kind of binding is edge-triggered in that it invokes the target when the value crosses from less that 64 to greater than 64.
Controller (No Edge Button)
Use this for MIDI buttons that send a non-zero value when pressed and no event or a CC value of 0 when released. ie: it triggers on any non-zero value.
Controller (Switch)
This is for non-momentary on/off MIDI buttons and switches that send a value >=64 when on and <64 when off.

Unlike most other objects, routes do not automatically appear as assignable objects in the Bindings editor. This is because by default routes don't have a name and therefore can't be referenced.

To create an binding to an audio or MIDI route:

Bi-directional bindings have certain limitations, including:

To enable bi-directional mode on a binding either:

Bi-directional bindings are typicall used is as follows:

Bindings can be configured as either "disabled", "half" or "full" bi-directional:

As mentioned above, the source and target objects of a bindings must be "similar" for bi-directional bindings to work. To find a similarly named object Cantabile uses the source object name with the following whole word, case sensitive replacements: