An audio port defines how a set of channels are mapped between an audio object and routes connected to the port. An audio port can be either an input port or an output port. For example:

An audio port consists of a set of channels and each channel has a number of assignments - each defining how an audio signal is mapped to or from the port. 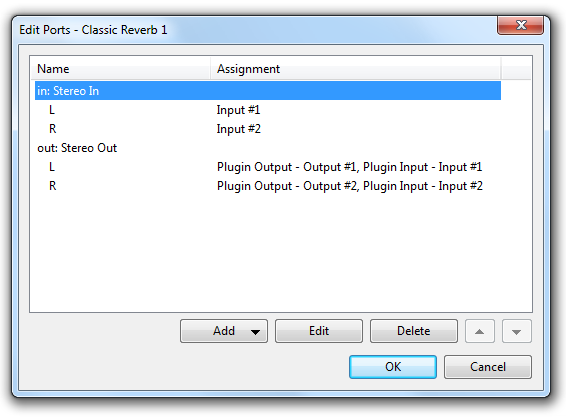 This plugin has a typical set of stereo in/stereo out audio ports. Note the two assignments on each of the output port channels which is explained below (see Wet/Dry Mix Control)

Notes on using this window: 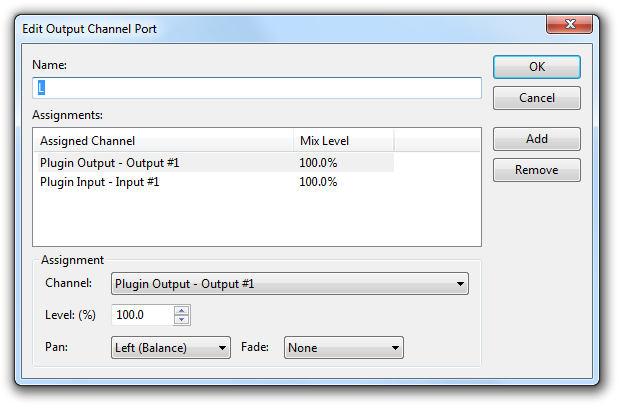 Cantabile supports mapping of audio signals from the audio driver to a set of audio input/output ports. By defining audio ports in this manner, Cantabile's song files can be configured to work with a known set of audio ports and are isolated from the underlying hardware. Should the hardware configuration change, the audio ports can be reconfigured for the new hardware and the songs can continue to run unmodified.

Audio driver ports are defined in Options -> Audio Ports and Cantabile maintains a separate set of assignments for each audio driver.

This second assignment is what allows wet/dry mix levels on effect plugins to work.

Any assignments from an input port directly to an output port are pass-through audio signals and not affected by the plugin slot's mix or gain controls.

For plugin output ports each audio channel assignment has additional settings to control how it's affected by the plugin slot's pan and fade knobs and in each case allows setting a direction (none, left, right) or (none, front, back) and a pan or balance mode.

Balance mode provides typical stereo balance control, dropping the signal level on just one side towards zero, causing the sound to move in the other direction. Pan mode uses a panning law to place a mono signal - typically reducing the signal level when centered.

By default Cantabile will automatically create one or two audio ports for both a plugin's input and outputs (depending on the functionality of the plugin). By only creating a limited set of ports it can reduce the processing load by not creating ports that won't be used.

Some plugins however might have additional audio channels that you might need to access. There are two ways you can map these channels to audio ports:

The second option will replace the existing audio ports with a new set that maps all of the plugin's channels. You can then either delete the the ports you don't actually need or use the Trim Unused Ports command (described below).

If you're using songs created from older versions of Cantabile where the default was to map all channels for new plugin instances, you might find those plugins have unused audio ports that aren't needed and may be contributing unnecessarily to the processing load.

To help mitigate against this you can use the "Trim Unused Ports" command to remove all ports that aren't in use. There are two versions of this command: 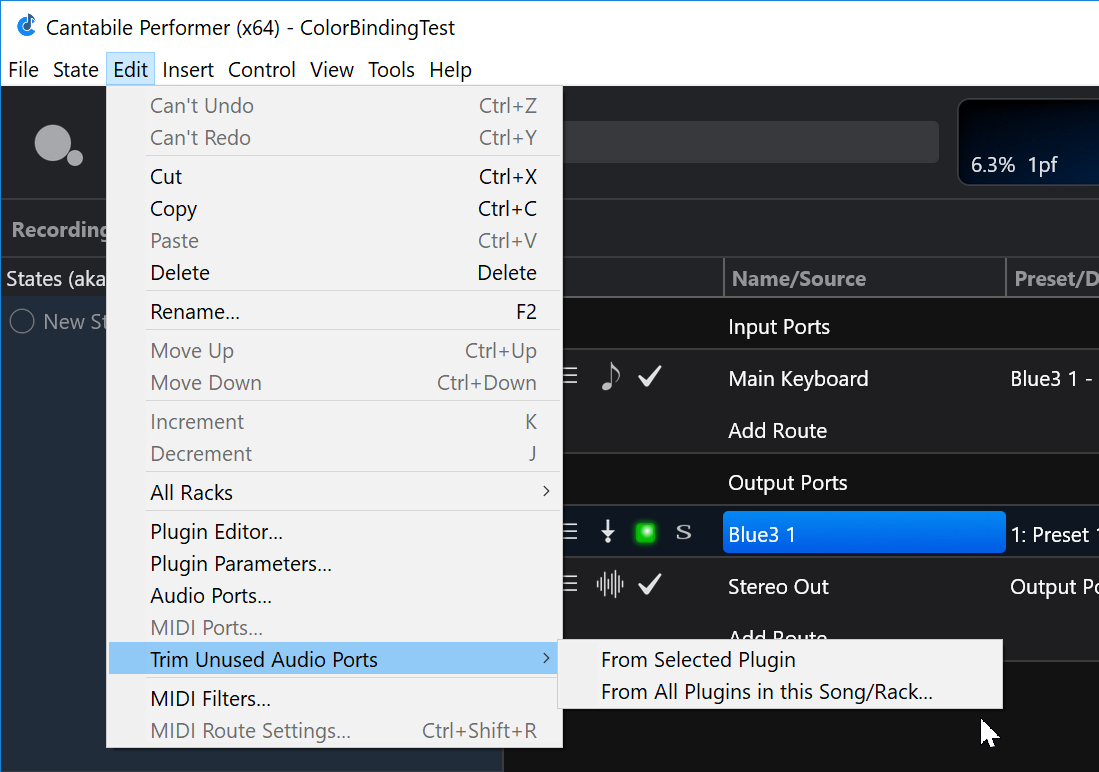 The first command removes all unused ports for all plugins in the current rack. The second removes the unused ports just for the selected plugin (and is also available via right click on the plugin slot).