A new experimental build Cantabile (3245) is now available that includes a couple of minor new features. But before explaining these I thought a little behind the scenes update is in order…

You may have noticed things have been a little quiet with new builds of Cantabile lately. The main reason for this is that I’ve been heavily focused on the OS X port.

This work is progressing well and I’m getting close to finishing the new cross platform UI engine that’s used to render Cantabile’s main window. Once that’s done I can start retro-fitting it into the existing code base and at that point there should be something to show for all the work.

In the meantime, here’s a couple of minor features that have been suggested and were easy to implement…

Cantabile has long had the ability to remap the range of a controller to get the precise response you want from any knob, slider or pedal.

One thing this can be used for is to make a controller more sensitive by reducing the source range to less than it’s full range.

eg: if you map a regular MIDI CC event like the following then you’ve effectively made that controller twice as sensitive because you’ve halved its source range.

One annoyance with this is if you move the controller past 64 then you need to move it back below 64 for it start having any action.

eg: suppose you moved the controller all the way up to 127, then turning it back the other way will have no effect until it drops below 64 again.

You’ll notice in the above screen shot a new option “Out of Range Mode” that controls what happens with source controller values outside the specified range.

The following choices are available:

For the above example in Slide mode it means that you can move past the 64 upper source range limit and nothing will happen, but as soon as you start turning back the other way the value will immediately start dropping again.

These options are available on value to value bindings and on the Controller Map MIDI filter.

Nothing too revolutionary here but songs and states now support colours. Just right click on any song or state and pick a color.

These colours are shown in the side panels and in the set list grid for songs. They’re not shown in the controller bar popup pickers, nor in the ticker bar.

The terminology has also been cleaned up to match the set list bindings (“Load Specific State” is now called “Load State with Index”) and since these are rarely used they’ve been movedto the bottom of the list:

This is all available now in build 3245. Enjoy! 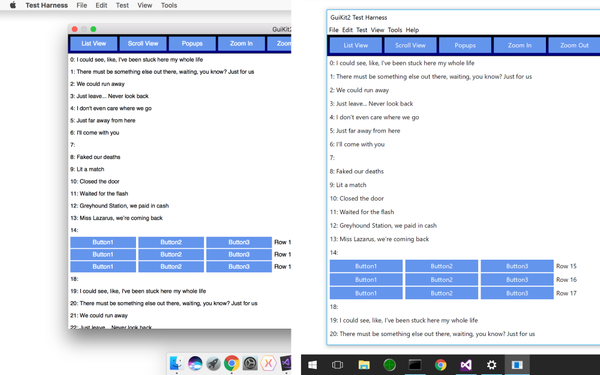 In my last post I hinted that I’d been working on the Cantabile for OS X port. Today I thought I’d share a little on what I’ve been up to…

After a long time missing in action, Cantabile’s Morph and Randomize tools are finally back!